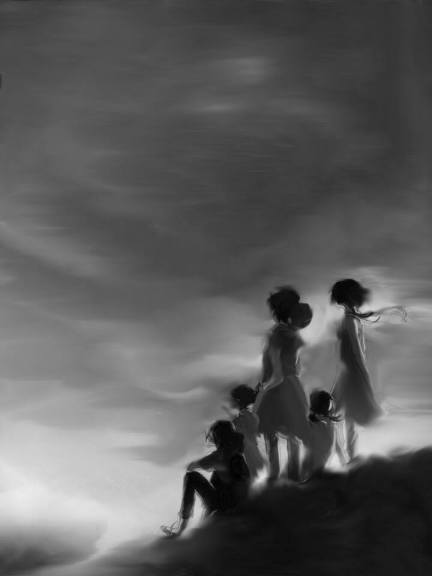 That was the summer of infernal heat, and every day Alice Evers wore an annoying hat with tangled primroses spilling pink and yellow down her back. So, we chased her and catcalled and threw brown pebbles and spitballs at her head and missed and did it all over again until Bobby Jackson blew it clean off her head with a rock from his slingshot. Then we all ran and laughed and even when we saw her lying on the ground with that strange red blistering her ear, we still laughed and laughed and said she shouldn’t have worn that hat, but Amy got mad and walked Alice home and then all our moms knew everything about it. Of course, then we were all mad at Amy. All summer long we were mad at Amy while we hoed the tomatoes and weeded zinnias and washed cars and all the other stupid stupid stupid chores that were all Amy’s fault. So we were grounded and punished and tired of the heat, and when August started, we chafed and scratched in our damp night clothes, but Bobby would wake us after midnight by whispering at our windows, trying and trying to get us to come out to the football field to drink beer, but we were all scared of our fathers and tired of being grounded and cleaning the garage when it didn’t need cleaning again, so we rolled over toward our walls and pretended we didn’t hear him even when his voice sounded tired and sad and not at all angry—just hurt. Then it was time to buy school clothes, and we forgot about Bobby and the beer and the football field and even Amy as we argued with our mothers and fathers over the color of backpacks and composition books and pens. Fall breezes lofted away the heat and apples ripened and our thoughts were full of essays and history and the value of x and even Amy was forgiven her sins and Bobby was walking Alice to classes and whatever had hinged on that white-hot day disappeared like the first flakes of snow testing their strength against the heat of our tongues.

W. E. PASQUINI’s poetry has appeared in Cheat River Review, Cider Press Review, and Fourth River, among others. Pasquini has been nominated for a Pushcart and has been a finalist in various book and chapbook competitions including: New Rivers Press’s MVP; Concrete Wolf Poetry Contest; and Frost Place Competition. Pasquini completed an MFA in creative writing and studied film at the University of South Florida in Tampa, Florida.

ASHWIN PANDYA is a sketch-artist and illustrator, whose work has graced many book-covers. Acknowledged for his digital art as well as musical compositions, Ashwin Pandya can sketch given any situation, description or character. You can visit his website here.