One of the most beautiful things about art is how it appears in seemingly infinite forms. A poem. A sketch. The way the sky looks at sunrise. Your brother’s dimpled smile. Every facet of our world just brims with art. Often times, its many shapes overlap and interconnect in ways we might not even realize. For Inklette’s third issue, we, in the prose department, wanted to do a feature reflective of this phenomemon.

Together, prose and visual artwork have connected in a way that is truly captivating. Artist Alexandria Heather’s piece, painted on a wooden cupboard with whorls of blues, reds, and yellows, is the stunning inspiration for a dark flash fiction about “girlhood, sociopathic freindships and an escalting series of dares” by Brynne Rebele-Henry, and a riveting piece by Nilesh Mondal that surprisingly converges Hindu mythology into an unexpected narrative.

This “mashup” of sorts is an experience that lovers of art–and all its forms–can appreciate.

Thank you, and enjoy. 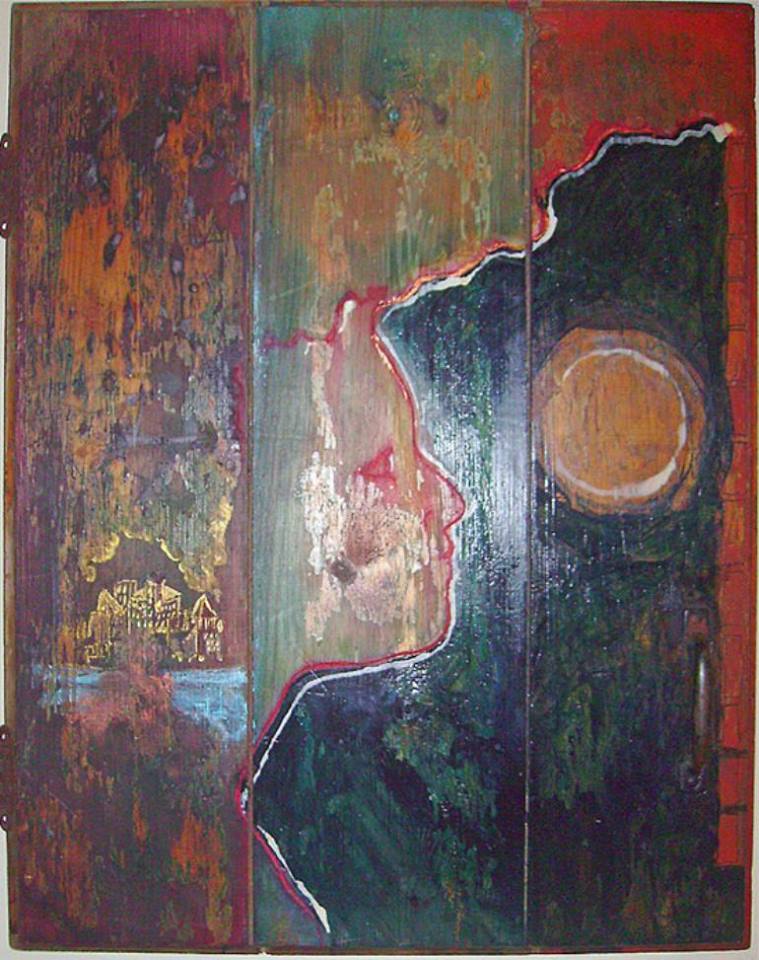 Seeker on door by Alexandria Heather

After everything with Julia I decided to become pure sugar: something impossible to deflate, a mass of a body so sweet that nothing bad could ever happen to it, that illness could only be absorbed inside its syrup.

When Julia shaved her head she looked new again, like a fucking just born baby bird, its bones not even formed yet. Those nights, we’d paint our nails black, catching polish on the outskirts of our fingers so our hands looked tarred and feathered. We’d eat melted ice cream until we got sick, then we’d go running for hours, try to get the saccharine sick out of us, make our bodies clean again. Julia wanted to be a model, before everything, so we would clip out pictures of the girls in Elle and Vogue, study their small bodies like we were researching insects. Often, Julia would stand in front of a mirror with a Sharpie, marking the parts of her body that could be improved, she’d slash black lines over her ribcage. The day before she got sent away, she’d called me and suggested we try an at-home-lipo procedure and, like I always did with Julia, I agreed.

Before she got sent away, Julia would flick an opened cigarette lighter over her fingers,
just to see if she would burn. She’d only eat red foods: meat nubby and raw, half-cooked
hot dogs. Said they reminded her of skin, something she always craved. We’d sit on her
porch and consume bloody deli slices and red velvet cake with crimson oozing frosting
mixed together, see who’d puke first. She’d dare me to cut a sliver of my finger off, or to
burn the inside of my thigh with a heated-up branding fork, to not eat for a week and
then consume frozen meat and try not to vomit. But Julia always won these bets, could
brand herself with a burning spoon and not blink, never got sick, until the hospital, at
least.
My friend said she killed her stepmom’s Chihuahua, which makes sense, given how much
she hated it, how she’d always lock it in her dresser on the weeks her parents went away.
Once tried to poison it, but the dog wouldn’t consume the liver pâté mixed with bleach
and laundry detergent.
The last night that I saw her, she was hunched over her bed, trying to pry the toenails of
her right foot off with a pair of tweezers. After she’d completed this task, she turned to
me, and for a moment it was like her face was gone, replaced with blank light in the shape
of a girl, something both human and not.

//He’s Shiva, of purani Dilli. While his namesake could dance tandaav and burn worlds with one glance, Shiva from Dilli is just an ordinary coolie, a gamcha tied on head as he ferries heavy bags without complaints from one end of the market to another.

Shiva’s choice of addiction is marijuana, and he knows all street peddlers in Purani Dilli who sell him his wares. It was the only time Shiva felt close to the God his mother had named him for, chillum in hand, head buried in a cloud of smoke, eyes closed as the world around him ceased to spin.

One year, Shiva had participated in a mythical play organised by the coolie and hawker unions on Navratri, and almost as a divine joke, he had got Lord Shiva’s role. That evening, dressed in blue paint and smeared in ash, a cardboard and rice light halo behind his false wig of mountainous hair, Shiva had let the smoke of the chillum spread like fog with each breath.

He doesn’t remember much from the play, except a few bits and pieces of dialogue and how euphoric he had felt on stage. Yet he remembers how the lady from the government colony beside the market, fair and beautiful and recently married, had looked at him awestruck, her lips glistening with sweat and gloss, and almost as if he had a third eye, Shiva had seen a halo behind her head as well// 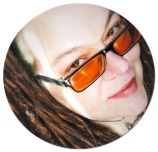 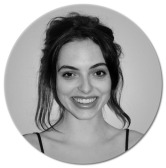 BRYNNE REBELE-HENRY’s fiction, nonfiction, and poetry have appeared or are forthcoming in such journals as The Volta, So to Speak, The Offending Adam, Adroit, Denver Quarterly, Prairie Schooner, Fiction International and Rookie, among other places. She’s a founding editor of Fissure, a magazine dedicated to furthering the voices of young LGBT+ writers and artists. Her book Fleshgraphs is forthcoming from Nightboat Books in September 2016. She was born in 1999 and currently lives in Richmond, Virginia. 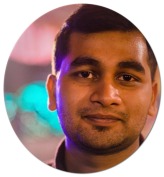 NILESH MONDAL, 22, is an undergrad in engineering by choice and writer by chance. His works have been published, or are forthcoming, in magazines like The Bombay Review, Muse India, Coldnoon Travel Poetics, Cafe Dissensus, Kitaab, etc. His first book of poetry, Degrees of Separation (Writers Workshop), is slated for a 2017 release.